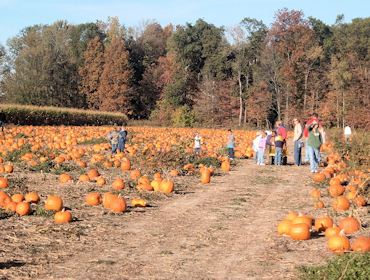 HISTORY OF THE PUMPKIN

The word pumpkin comes from the Greek pepõn for a large melon. The English termed it pumpion or pompion. This term dates back to 1547, yet it did not make an appearance in print until 1647. The pumpkin was one of the many foods used by the Native American Indians in the new world and was a welcome discovery by the Pilgrims. The Indians pounded strips of pumpkin flat, dried them, and wove them into mats for trading. They also dried pumpkin for food. The new Americans heartily embraced the sweet, multi-purpose fruit which became a traditional Thanksgiving food. The colonists used pumpkin not only as a side dish and dessert, but also in soups and even made beer of it. The blossoms can also be used as those of the squash family, such as batter-dipped and fried.

Pumpkins are available in all shapes, colors and sizes, from the miniature to the gigantic sweet sugar pumpkin which can weigh in at as much as 100 pounds. The pumpkin is a member of the gourd family, which also includes muskmelon, watermelon and squash. Its orange flesh has a mild, sweet flavor which is used in side dishes and in many desserts. The seeds, known as pepitas, can be roasted and eaten as snacks. Another by-product, pumpkin seed oil, is normally mixed with other oils for cooking, salad dressings and other uses due to its strong flavor and color. Fall and winter are the harvesting seasons for this tasty fruit of a trailing vine.

Pumpkins are a tasty source of vitamins and minerals, particularly beta-carotene, vitamin C, and potassium. It also helps prevent arterosclerosis, or hardening of the arteries, which can lead to strokes and/or heart attacks. Pumpkin seed oil and pumpkin seeds are a good source of zinc and unsaturated fatty acids which are effective help for prostate ailments. A study by the USDA indicated that diets high in pumpkin as a fiber source tended to curb the appetite, yet provided more food for the same calorie count. The subjects in this study also absorbed less fat and calories from their food. As with all homeopathic treatments, consult your physician before dosing yourself.

The Celtics that lived in what is now Great Britain and Northern France would carry a lantern when they walked on the eve of October 31. These lanterns were carved out of big turnips and the lights were believed to keep the evil spirits away. Children would carve faces in the turnips. These carved turnips were called "jack-o-lanterns.

Legends have it that the "jack-o-lantern" got its name from a stingy and mean old man, named Jack, who when he died was too mean to get into heaven. When Jack went to hell he was meet by the Devil who gave him a piece of burning coal and sent him away. Jack placed the burning coal in a turnip to use as a lantern to light his way. The legends claim that Jack is still walking with the lantern looking for a place to stay.

When the early settlers came to America they found the big round orange pumpkin. Being larger and much more colorful than turnips, the pumpkin made great "jack-o-lanterns". Eventually the pumpkin would replace the turnip.

As the settlers spread across America they took their Halloween celebrations with them. The custom of the "jack-o-lantern" would travel with them. Eventually the Pumpkin would become the most widely recognized symbol of the Halloween holiday.